Home is where we are parked

Home is where we are parked 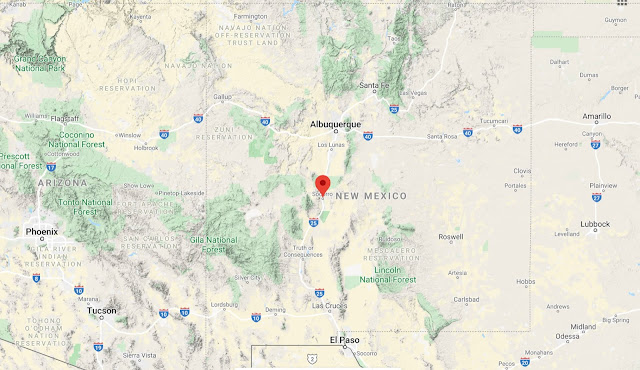 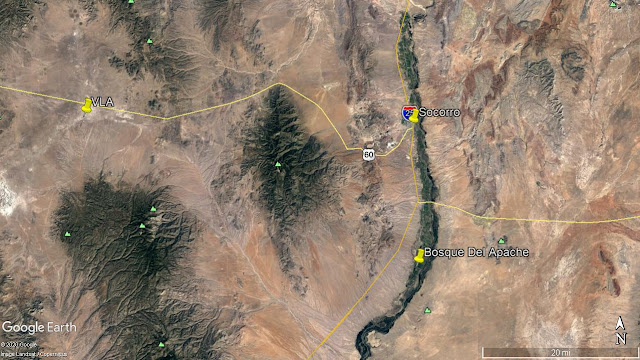 Casey’s Socorro RV Park was just okay.  The location was convenient since it was just a short ways from the I-25 exit.  It’s rundown and basically a gravel parking lot.   Permanent residents occupy about 75% of the park.

As we have found in other such parks, there was one annoying dog that was put “out” on the RV patio and allowed to bark continually even when the occupants were home.  And the owners of the park don’t make any efforts to squelch such behavior.

There is only one bathroom/shower for 84 sites. They do keep it nice and clean.

The office doubles as a hair salon so Shawn was able to get his hair cut too.  That was a first in nine years to find a hair salon at an RV park.

There are 84 sites.  The back-ins along the rear fence are filled with full-time residents.  The other sites are pull-throughs and there is plenty of room to maneuver but the sites are narrow.

We were in an end site and were afraid to park our truck next to us since there were a number of folks leaving and driving entirely too fast early in the morning and in the dark.  So, we parked our truck over next to a big garage/work shop.

We had full hookups.  The wi-fi was barely usable.  Fortunately, we had a good data signal so we hot-spotted for the three nights we were there.  It would not be a problem to get satellite at any of the sites.

There was some distant train noise and an occasional loud truck getting off the highway.  Otherwise the noise level was not as bad as we had expected.  Still, we played our white noise at night.

Socorro has a population of about 9,000 and is the Socorro county seat.  It sits at 4,600 and has mild, dry winters and hot summers.  It is home to the Elfega Baca Golf Shoot, one of the two most difficult golf courses in the world.

Socorro has basic services and shopping.

Albuquerque, New Mexico’s largest city, is about 75 miles to the north.  It sits at a higher elevation of 5,312 feet.  With a metro population of just over a million people, you could find any service or shopping you would need there.

One of the reasons we stayed in Socorro was so we could view more sandhill cranes.  The campground is only 25 miles from Bosque Del Apache, one of the areas where thousands of the birds gather each winter.

“The heart of the refuge comprises approximately 3,800 acres of Rio Grande floodplain and 9,100 acres of irrigated farms and wetlands. In addition to this, the refuge contains 44,300 acres of arid grasslands and foothills of the Chupadera and San Pascual Mountains.”

“The refuge is well known for the tens of thousands of cranes, geese, and ducks who winter here each year.  There have been 374 different bird species observed in the Bosque del Apache National Wildlife Refuge since 1981, making it one of the most diverse areas for bird species in the United States.”

“A twelve-mile-long loop road divided by a cutoff into a "Farm Loop" and "Marsh Loop" allows automobile drivers excellent views of wetland wildlife and raptors, and there are several short (1.5 to 10 miles) walking trails.”

We drove the 12 mile loop scanning for sandhill cranes.  We only saw a few cranes.  We had seen a post on Facebook that thousands were arriving in the San Luis Valley in Colorado.  We realized they had probably migrated from New Mexico.  We should have been there a week or two prior.

We did see a few odd ducks and a great blue heron in the ponds, a road runner crossing the road, some red tail hawks soaring above, and a bald eagle in a tree. We even looked closely for alligators in the irrigation ditches - ha ha! 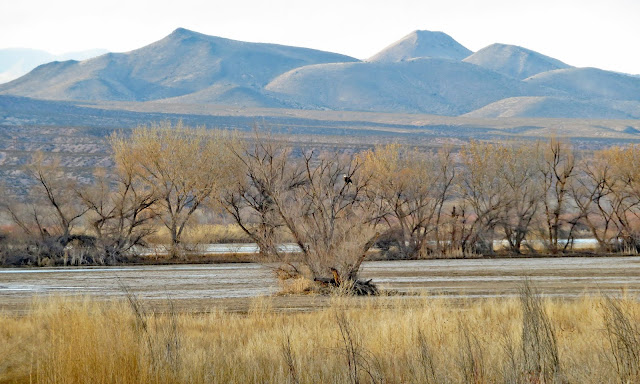 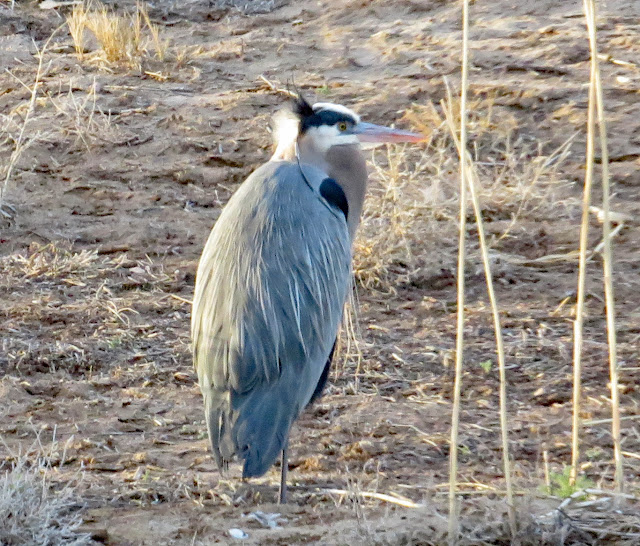 We were excited to see our first wild javalinas in the desert this winter.  We had been seeing signs of them everywhere.  There were about a dozen pigs in the squadron. 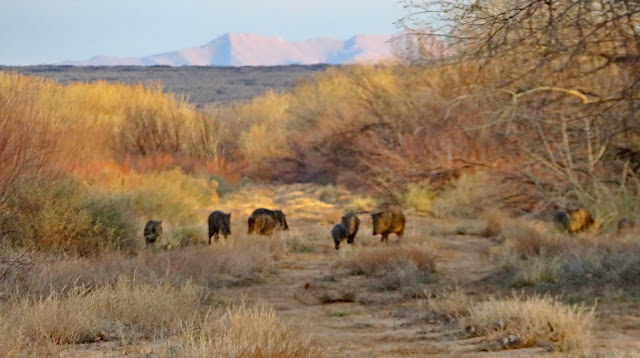 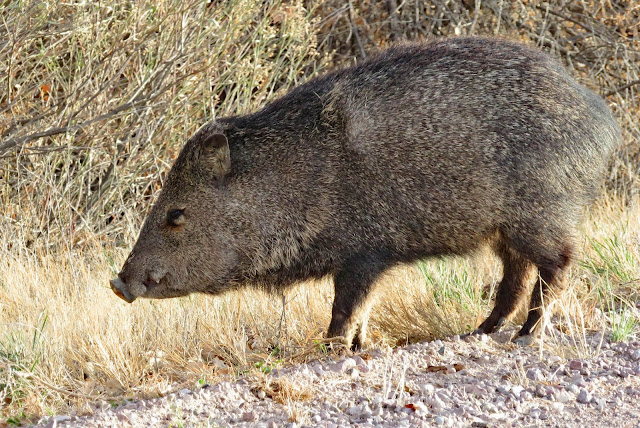 Even though we didn’t see the birds we set out to see, it was a lovely afternoon and we saw a beautiful sunset.

“The Very Large Array (VLA), one of the world's premier astronomical radio observatories, consists of 27 radio antennas in a Y-shaped configuration on the Plains of San Agustin fifty miles west of Socorro, New Mexico. Each antenna is 25 meters (82 feet) in diameter. The data from the antennas is combined electronically to give the resolution of an antenna 36 km (22 miles) across, with the equivalent sensitivity of a dish 130 meters (422 feet) in diameter.”

Both Shawn and I are science geeks and wanted to go learn about the antennas.  The VLA was a good hour east of Socorro.  They built it in a remote area where there as little electronic interference as possible.

We parked near the visitor center and shut off our cell phones per their instruction before going in.  We watched a film with information on how it was built, how it operates, the discoveries they made about our universe with it, and how it is being upgraded. Then we went on a half mile walking tour of the area. 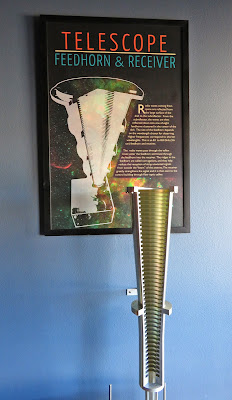 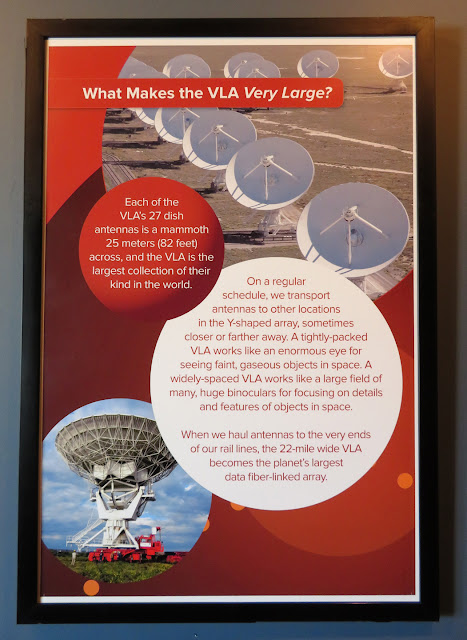 The walking tour took us to the Radio Sundial, past the Whisper Dish Gallery, on to the Radio Astronomy Gallery, and finally to the base of one of the 230-ton working antenna on the array. From there we headed toward the control building’s outside staircase to the observation deck for a view of the array itself and details about the supercomputer processing taking place inside the control building. The walk returned us to the Visitor Center.

My favorite interactive display was the Whisper Dish.  They had two dishes set up several yards from each other.  We each stood near the dish and tried to softly whisper to the other.  It was amazingly loud standing in the dish.  The concave shape really amplifies sound! 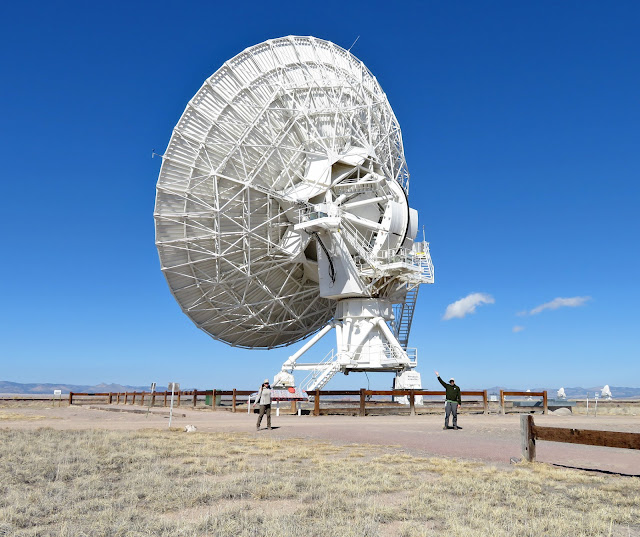 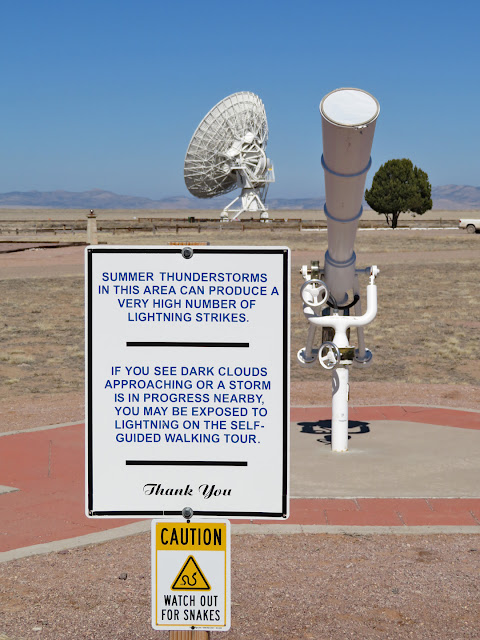 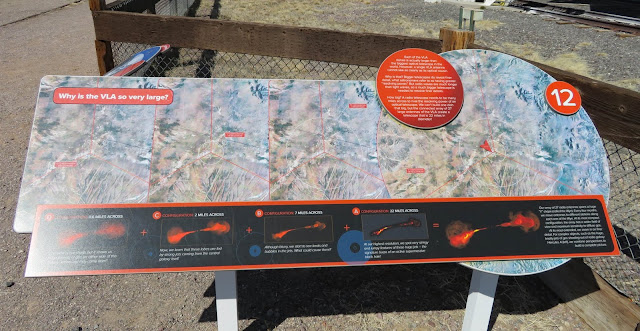 Finally, we drove to the antenna assembly building to get a good view of one of the transport cars. 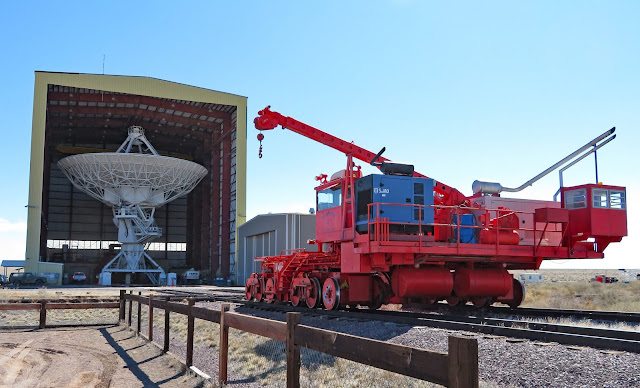 It was all very fascinating.  Now, when we hear astronomical news, we’ll have a much better idea as to where it’s coming from and how the array works to gather that data.

“The VLA is in the midst of a 7-year project to make a complete, multi-epoch map of the 80% of the sky visible from its location.  This project will reveal millions of celestial objects previously unknown to science, with a tremendous potential for new discoveries.” 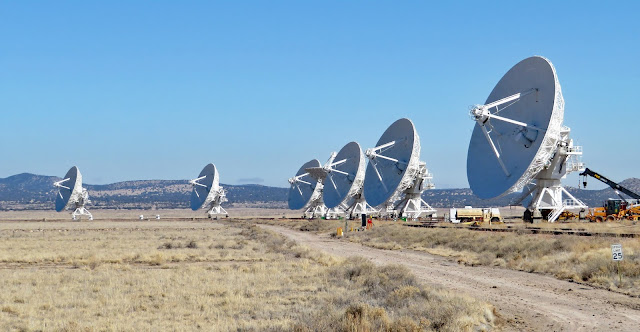 As we were leaving the VLA, we could see a large bird near the side of the road.  It was feeding on a carcass.  As we drove closer, we slowed and realized it was a Golden Eagle!  Though it was sad to see the dead critter, it was providing this majestic bird with needed sustenance during the scarce winter. 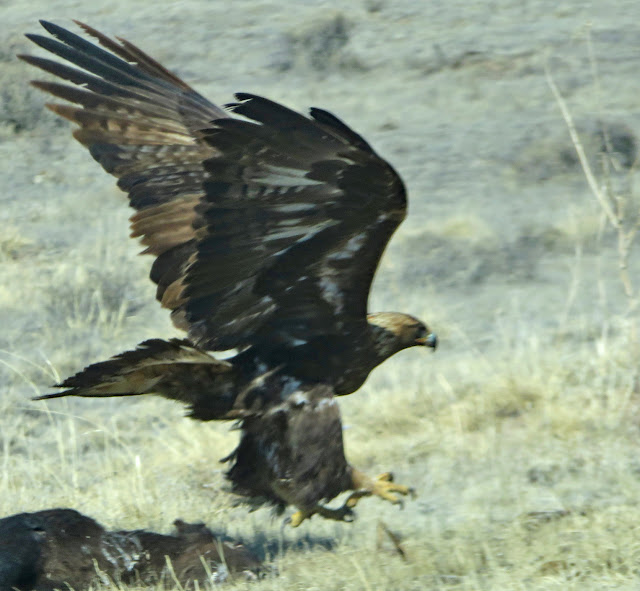 The first night we were in Socorro, we drove an hour north to Bosque Farms to meet Shawn’s cousin Shasta and her husband Darren.  We received a pleasant surprise when we walked in and their daughter Khyira was with them.

We met at their favorite restaurant, Sopa’s.  Just like any good New Mexico restaurant, they had green chili.  But they don’t ask if you want hot or mild.  And it was all hot!  Still it was delicious! 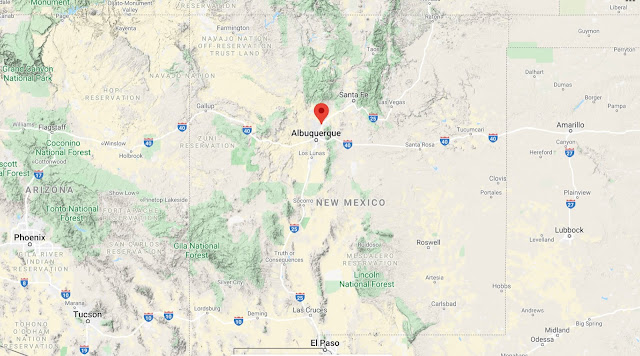 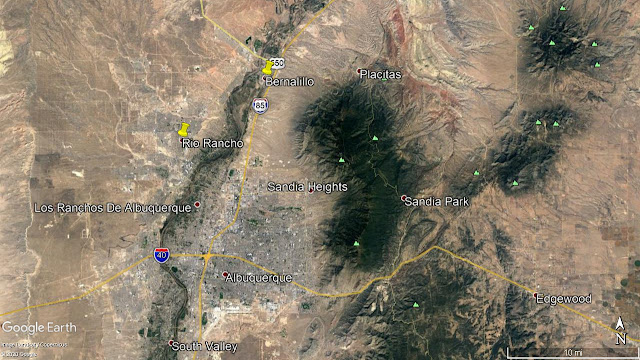 “Stagecoach Stop RV is a quiet hidden park away from the city traffic and noises, yet a very convenient location, only a 5 minute drive to I-25, just minutes away from a variety of dining establishments, and within walking distance to Walmart store.”
“We are located 16 miles north of  Albuquerque’s Historic Old Town and 40 miles south of Santa Fe, with a spectacular view of the Sandia Mountains to the east.”

Stagecoach is a nice RV resort.  It has 85 paved Pull-Through Spaces with full-hookups, Heated Seasonal Pool/Spa all year round.  The Restrooms/Showers and laundry were all were all clean and nice.  Plus, they have an Exercise Room, Rec Hall and a Mini Theater.

The park was 98% filled and it was primarily full time residents but they do limit the year of the rigs and everything looked tidy and well cared for in the nicely spread out sites.  Their philosophy is, “maintain a peaceful and neighborly atmosphere and remain a safe place for all.”

We could barely hear traffic at night from the nearby Highway 550.  It was much quieter than the KOA where we have stayed before.  If we were to stay in the area again we would return to Stage coach.

Rio Rancho is a suburb of Albuquerque sitting at about same elevation of 5,282 feet and boasts a population just shy of 100,000.   “It is the third-largest and also one of the fastest expanding cities in New Mexico.”

We spent Saturday with family.  First, we met Uncle Skip at his favorite restaurant, Weck’s, for breakfast.  He surprised us by bringing cousin Ashlynn along.  She is a gregarious young lady and we enjoyed our time with her.

Next, we went to visit Shawn’s Grandma.  Grandma Sue was so happy to see us.  Shawn had loaded a few hundred of his family’s pictures including pictures of Grandma when she was much younger.  She really enjoyed looking through the pictures and sharing stories with us.  Shawn also had many pictures of our future home so we could tell her about the house first hand. 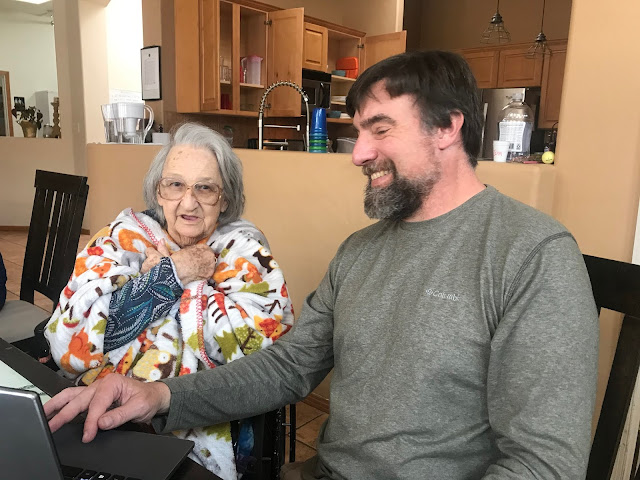 We met cousins DJ, Heather, and Kyllian for dinner at The Range, an Albuquerque landmark. They have been serving up “ordinary food done extraordinarily well” ever since 1992.  We enjoyed the food, but more than that we enjoyed the company.  Conversations with DJ and Heather are always lively and now Kyllian is old enough to join in.  We look forward to adventures when they come to visit us in the San Juans!

Now we are in Pagosa Springs, Colorado. Our nine year traveling odyssey has ended. However, we are thrilled to have a home base in a great community and we will continue to make occasional trips.

We'll have a finale blog that summarizes our nine years of travel out in a week or two.  We’re having fun looking through nine years of pictures and memories so we can the share the “BEST” with you.

Posted by Mudonthetires at 7:39 AM No comments: